The City of Fort Collins is "taking steps to restore flows, fish passage, and ecological function" of Colorado's Cache la Poudre River (Ref. 6). The river was "heavily manipulated for irrigation and mining" throughout the early 20th century (Ref. 6), and today continues subject to the impacts of gravel mining, agriculture and urbanisation (Ref. 1). Regional climate change predictions further complicate our ability "to understand how the river’s hydrology and ecology may respond to warming climate scenarios" (Ref. 1). The City of Fort Collins was, therefore "invested heavily in this urban river through extensive planning efforts, purchase of approximately 700 hectares of lands within the river’s floodplain, projects to address stormwater control and conveyance, water quality management, and acquisition of in-stream flow water rights", and in 2011, the City’s Natural Areas Department published the Cache la Poudre River Natural Areas Management Plan which outlined "opportunities and challenges in supporting the river’s ecological function and reducing risks to life and property during significant flood events", particularly through the implementation of nature-based solutions (Ref. 1). A suite of nature-based solutions has since been proposed and implemented by the City of Fort Collins, two of which are the Sterling Pond Ecological Restoration (also referred to as North Shields Ponds), and the McMurry Natural Area Ecological Restoration (Refs. 1 and 2). 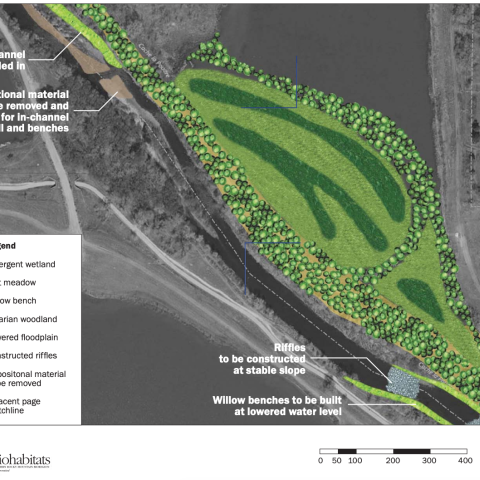 "The primary objective for the Sterling Pond and McMurry Restoration projects was to remove high, artificial banks [which were] created along the riverbank during gravel mining operations" (Ref. 1). Whilst the creation of these artificial banks sought to prevent river flooding during mining activities, they caused the Cache la Poudre River and its natural processes to become "highly modified and dysfunctional", with the elevated banks resulting in "disconnect[ion] of the river from its floodplain, increased bank erosion due to increased shear stresses resulting from channel confinement, and eliminated bankside vegetation and habitat" (Ref. 1). The project, therefore, sought to undo the channelisation of the river, recognising that the interaction between surface and groundwater is "necessary to sustain river health and habitat while providing for optimal water quality (filtration) and increased water quantities", hence the river ecosystem as a whole needed to be supported, from the river channel through to the riparian forests, and associated wetlands (Ref. 1). Through the implementation of nature-based solutions, the project sought to support "the river's ecological function[ing] and reduc[e] risks to life and property during significant flood events" (Ref. 1).

In order to mitigate the above sustainability challenges, the following implementation activities were undertaken: - relevant sections of the river were re-naturalised through "significant removal of concrete, debris, and [five] old cars from the river bank placed there historically to prevent erosion" (Refs. 1 & 5); - "steep and unnatural banks" which were constraining the river were lowered, reconnecting the river with its floodplains (Refs. 3 & 5); - material excavated from the artificially high banks at the Sterling Pond sub-project was "placed...in the adjacent former gravel pit pond to create a mosaic of riparian woodland, wet meadow and emergent wetland" (Ref. 6); - with both the Sterling and McMurry sites having been recognised as a "degraded ecosystem", a total of five hectares of riparian floodplain forest and several hectares of wetland were restored (Refs. 1, 2 & 3); - in order to "increase native species diversity and enlarge the riparian forest", a total "five diverse vegetated zones were created – emergent wetland, wet meadow, willow, cottonwood, and upland grasslands" (Ref. 1); - 1,200 trees, 25,000 shrubs and 60,000 wetland grass plugs were planted, with an emphasis being placed on planting native vegetation and floodplain trees (Ref. 1); - removal of the Josh Ames Diversion Structure (the defunct concrete dam) sought to achieve "multiple ecological benefits including lowering river water temperatures, eliminating fish barriers, and enhancing public safety for recreational float boating" (Ref. 1); - following removal of the dam, a pool and riffle system was created which sought to "improv[e] aquatic habitat and fish passage and allo[w] for better sediment transport" (Ref. 6); - the natural channel width was restored, and sediment which had accumulated behind the dam was repurposed "to provide additional lateral connectivity and improved riparian habitat essential to insects, fish, birds, and other wildlife" (Ref. 6); - in reconnecting the river with its floodplains, it was hoped that groundwater and fluvial water could interact as an ecosystem, providing flood protection and also reducing "negative physical and chemical changes" associated with low flow periods (Ref. 1); - a pedestrian trail and designated fishing areas were installed "to facilitate public use and stewardship of the site" (Ref. 1); and - "At McMurry, a series of boulders placed at approximate water elevations were placed to help visitors understand the importance of functional floodplains, and the necessity of high river flows to spill out of its channel" (Ref. 1).

The City of Fort Collins Natural Areas Department published the Cache la Poudre River Natural Areas Management Plan in 2011 and led the restoration efforts in combination with the Colorado Rivers Trust, a non-profit streamflow restoration organisation (Ref. 1). Biohabitats and their subcontractor, Budhoe Backhoe, were involved in the implementation activities (Ref. 6). 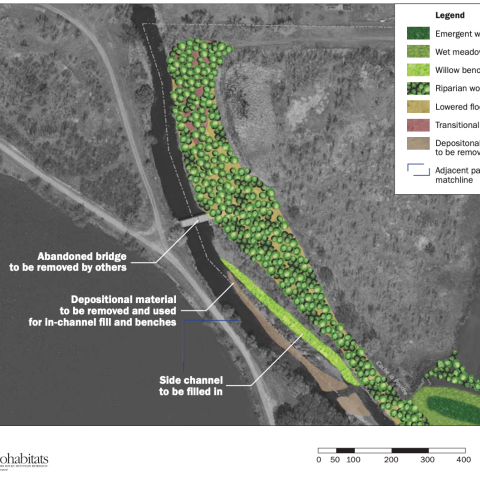 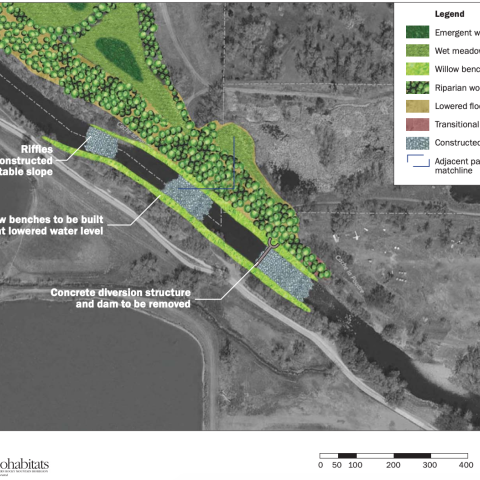 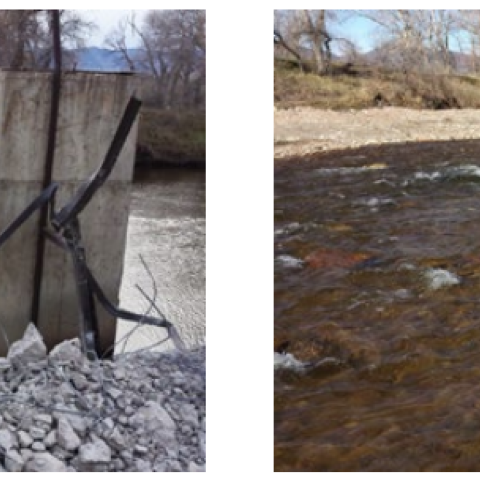 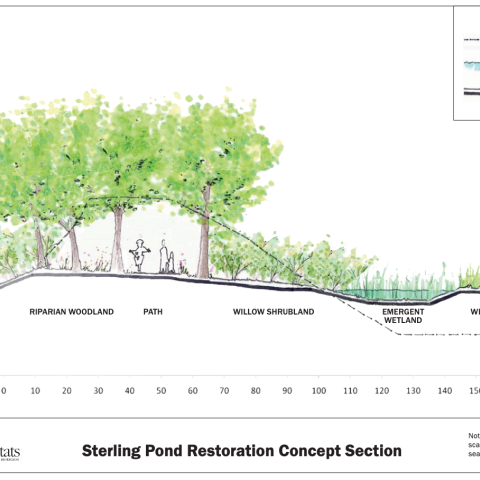 Sterling Pond Restoration Concept as devised by Biohabitats
http://coloradowatertrust.org/wp-content/uploads/2018/07/Sterling-Pond-Restoration-Final-Concept.pdf
Information about this nature-based solution was collected as part of the UNA global extension project funded by the British Academy.